George passed away at home after a brief illness. He was a dedicated historian and set up this web site to commemorate the 1919 Strike.
While working for Lloyd Axworthy at the Institute of Urban Studies, George completed his master's thesis on "Public Policy for Downtown Redevelopment in Winnipeg" at the University of Manitoba in 1971. Later he worked for Aronovitch and Leipsic on special projects, followed by a directorship at Heritage Winnipeg.
It was at Heritage Winnipeg that George met Bob Dambach from Prairie Public TV. Together they created documentaries, beginning with "Pyramids on the Prairies", "Lake Winnipeg", "Assiniboine Park", "Mennonites of Manitoba" (for which he won a Telly award), "Portage Avenue", and "Built on Agriculture". It was a wonderfully creative time for George and he thoroughly enjoyed it.
George is survived by his wife Susan of 47 years, his son Peter, daughter-in-law Tara.
at 09:09 No comments:

May 15, 1919. At 7am workers started walking out of their workplaces across the city. By the end of the week the city was shut down by the workers in what became a historic moment for Canada, though they did not know it yet.

From the book Magnificent Fight, “There was a huge cast of players in the drama that was acted out in the Winnipeg General Strike, mostly divided by class but with many cultural, ethnic and gender alliances or antagonisms providing a complex script. The issues that motivated the protagonists were both simple and complex, some contentious and others confused. All of which stimulated different perspectives of what was at stake in The Strike. Ultimately the drama ended in a violent confrontation that left the Winnipeg working class disappointed but not defeated.”

The Strike represented issues still at play today. The workers were fighting for the right to organize in unions and for a living wage. Veterans were protesting their treatment by the government. Immigrants wanted respect and a fair place in society. The main strategic action promoted by the strike leaders was to withdraw their labour, to stop working. As William Ivens wrote in the Western Labor News on May 21, that the “only thing that the workers had to do to win The Strike is to do nothing”.

Today workers are also consumers. And there is power in what we buy, when, where and how.

Today there is a strategic suggestion from The Strike. In addition to taking a public stand on what we believe, also withdraw participation in what is exploiting us. Don’t shop!

Just think the reaction we could have when we refuse to buy products wrapped in useless and wasteful plastic (covid restrictions showed how quickly the air could be clearer). Think what we can tell business leaders if we don’t shop at Walmart or Tim Horton’s (which I admit would be difficult for me). Think what power we could have if we seriously and vigorously buy local, not imported. Think what will happen when we cancel Netflix.

There are instructions and inspirations in our history. What we do with history is up to us.

Once again, a hundred years later, is the call for a living wage.

One of the main demands of the 1919 strikers was to establish  'living wage' for workers. They knew it was important  to pay a fair or decent wage so families could meet their daily needs. They also knew a living wage was good for the local economy, as it would keep money circulating and generally lifting the well being of communities.

FINALLY
Victory Park has its own brass plaque.
After 100 years, the location of the park is marked by a tiny plaque on Waterfront Drive between Pacific and James Avenues.
But if going by you may miss it. It is on the south side of the condominium building, accessible by a sidewalk going west.
It was put up this spring, without notice. When the developer was given the land, it was required to post a commemoration of the location, which was not done until this year. 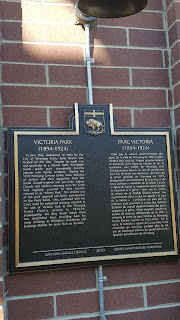 100th Anniversary of The Strike

2019 was the centenary of the General Sympathetic Strike.
Here are some of the events that took place, engaging an estimated 10,000 people:

MayWorks Festival of Labour and the Arts
May, numerous locations

Premier of  movie STAND (was known as STRIKE the musical)
September

There were two very visible events that fed the view that The Strike was a revolt, not merely a protest. One was an important meeting at the Walker Theatre on December 22, 1918, organized by the Winnipeg Trades and Labour Council and the Socialist Party of Canada. It was “dedicated to the purpose of finding no good at all in the government.”  The meeting was planned because the workers realized that the Trades and Labour Congress officers were “impotent in the matter of securing from the Government redress of the grievances complained of, and were determined that the voice of protest should be heard."  (Defense Committee 1920:4)
The 1,600 workers at the meeting were protesting the use of Orders-in-Council (Dominion Cabinet orders) to deal with issues they believed parliament should have responsibility for. They believed Orders-in-Council were undemocratic in suppressing union action, limiting freedom of the press and curtailing political party activity. The meeting was also a protest against the continued imprisonment of political prisoners and sending military forces to fight the revolutionary government of Russia. The meeting endorsed a resolution (copied from a similar Toronto meeting), "that conditions in this country do not, and never have warranted such an unjustifiable interference with the liberties of the people. We view with apprehension the introduction of autocratic methods and the increasing tendency of a few men to usurp the prerogatives of the people which are alone vested in their elected representatives.” (Defense Committee 1920:7)
The report on the meeting in the Western Labor News of December 27 noted that John Queen, “then called for three cheers for the Russian Revolution. The meeting ended with deafening cries of ‘Long live the Russian Soviet Republic! Long live Karl Liebknecht [a German Socialist who was murdered by nationalist troops the following January]! Long live the working class!’ The meeting ordered that, if possible, the message of congratulations be cabled to the Bolsheviki.” A follow up meeting at the Majestic Theatre, only organized by the SPC, reiterated the critique of government made at the Walker, but laid on more of the socialist critique of government. Despite these meetings, there was never a formal alliance between the unions in The Strike and any political party.

Introduction to Victoria Park
at 17:31 No comments:


During MayWorks each year, there is a 1919 General Sympathetic Strike Tour on the last Sunday in May. The City Transit bus was full in previous tours so it is wise to book space early.
To register for the 2019 Strike Tour, contact commgroup@mts.net or call/text 204 793 3289.